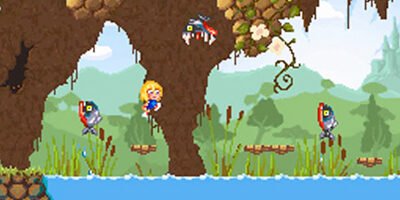 It could be seen as ironic that the Giana Sisters has been released exclusively on the Nintendo DS, with Nintendo’s blessing, especially as the original game has such an interesting history.

The Great Giana Sisters was a platform game developed by Time Warp Productions in 1987 and published by Rainbow Arts for the Amiga, Amstrad, Atari and Commodore 64.

However it fell foul of Nintendo’s legal powers due to its explicit similarity to their own Super Mario Bros. Consequently Rainbow Arts was forced to withdraw the game from sale and even had to cancel the release of the completed ZX Spectrum version.

Skip forward to 2005 where Nitendo seem to have chilled out somewhat, and a new version titled simply Giana Sisters was made available for mobile phones.

Jump forward to 2009, and a new Giana Sisters game has just been released on the Nintendo DS, featuring all-new levels and more game play elements. This time it comes with Nintendo’s blessing.

So what is the lure of a game that is basically the same game as it was over 20 years ago? Essentially its genius lies in its simplicity – the ability to be able to just pick it up and play with out even thinking – the controls are simple and intuitive, the early levels easy and quick. Most of all though, it’s absolutely addictive due to the sheer enjoyment of playing something that rekindles the magic of your misspent youth.

The graphics – seeing as it’s on the DS – are simple, but even in their simplicity they hold a massive amount of detail – you can tell that a lot of effort has been put into colour choices, character design and indeed, overall design that makes the whole game just feel right.

The level design is great, lending the game to be easy enough for the youngest kids to pick up and play through, whilst having enough challenges, and optional exploration to keep the older, more experienced gamer satisfied.

It’s probably not going to win any awards, o be praised for it’s originality, but Giana Sisters packs a whole lot of punch in the fun department, and makes my first foray into handheld gaming an immensely enjoyable and memorable one.