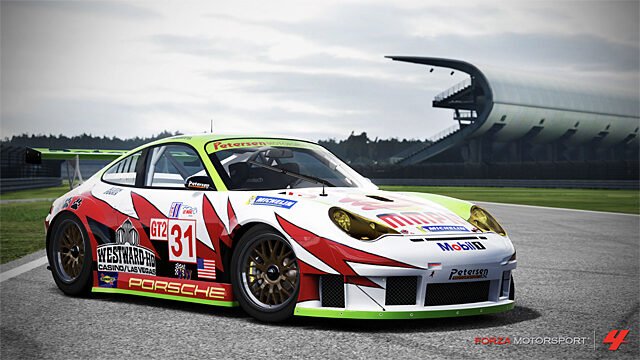 Porsche and Microsoft have announced that 30 Porsche vehicles are now available for download as part of the Porsche Expansion Pack for Forza Motorsport 4.

Forza Motorsport 4 is the highest-rated racing game of this generation, available exclusively for the Microsoft Xbox 360 gaming console. The Porsche Expansion Pack will be offered for download through Xbox LIVE by customers who own the Forza Motorsport 4 game for 1600 Microsoft.

“This is an excellent opportunity for Porsche to offer a virtual experience with our sports cars in a very fitting environment – on race tracks around the world,” said Andre Oosthuizen, Vice President of Marketing for Porsche Cars North America. “In many ways, best-selling gaming titles like Forza Motorsport 4 generate enthusiasm for products that often translate into a lifelong connection to the brand.”

“Turn 10 has been pleased and privileged to work with the fans of Forza within the Porsche organization,” said Mike Humphreys, director of business development at Turn 10 Studios. “We’re gratified about their enthusiasm for partnering with us to deliver their storied marque to the many fans of racing games, Porsche and Forza Motorsport 4.”

“The emotion and realism of Forza 4 creates so much of that same challenge and buzz I get out of putting a sportscar on the edge during my day job,” said Patrick Long, Porsche Motorsport Factory Driver. “It’s also an excellent way to learn the same tracks that we race in the American Le Mans Series (ALMS) and around the world. In addition, it is really cool to share the experience with our fans while at the same time driving one of my dream combinations of my favorite Porsche models on my favorite racetracks around the world.”