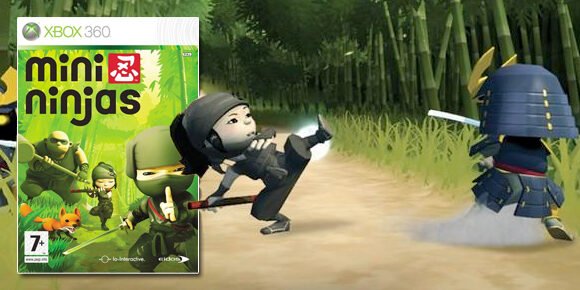 Heroes often come in small packages, and Hiro is no exception. His adventure however is huge. The world is on the brink of chaos, as darkness spreads through the land â€“ thanks mainly to the Evil Samurai Warlord and his quest for world domination.Â  Using his magic skills, the Evil Samurai Warlord has been turning forest critters into Evil Samurai Soldiers, and has brought forth the Warlordâ€™s reign of terror.Â

All the good Ninjas who were sent out to see what was happening have not returned, so now it is up to you, the smallest Ninja around, to save the day. Fortunately you have a few skills up your sleeves and the ability to up skill as you go along, including a variety of magical spells to help you battle the evil forces hell bent on your destruction.

Presented in a simple animation style, Mini Ninjas is anything but simple on the 360, the graphics, though plain on the surface are smooth and fill of rich detail just calling out to be explored. And exploring is at the heart of Mini Ninjas. Itâ€™s one of those games where you can just go about fighting your way to the next level, or you can take your time finding all the hidden treasures and up skilling your self along the way.

As good as an explorer as I thought I was, busy picking up everything I saw along the way, when I got the first castle I was presented with an option; apparently I had not discovered/collected all of the booty left lying around for me. In fact, looking at the stats I had missed out on quite a lot. So, my choice was to go back and look for everything or continue on with my quest.

Itâ€™s hear that the game shows what itâ€™s made of â€“ simple enough for kids to pick up, but with enough depth to keep your average gamer occupied, trying to find that last piece of hidden booty.

The combat is fairly simple, but with an array of options. Fighting is an easy combination of keys, with straightforward attack; stun attack, stealth attack and jump attack all available from the get go. Itâ€™s when the magic comes into play that you get more options, with potions and spells that allow you to do focused attacks, fireballs, right through to inhabiting the body of an animal close by.

Varity is the spice of life they say, and Mini Ninjas has it nailed down.

Of course stunning animation, easy to pick up, but engaging for the long run, game play will only get you so far in a game with cutesy animated characters, the big thing about Mini Ninjas is that itâ€™s fun and addictive to play. The characters ooze personality and make journeying on their quest and enjoyable experience for all ages, bringing the joy of playing back into the world of gaming, which sometimes can seem over focused on the serious side of things.