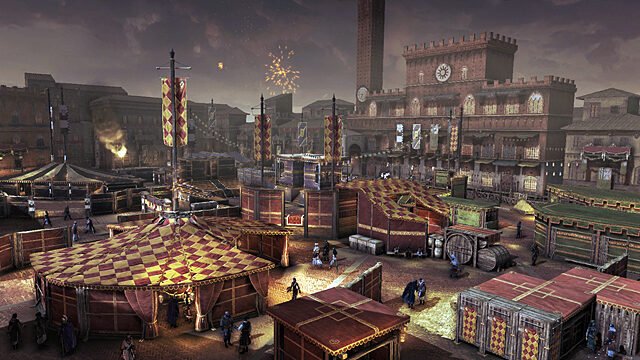 Players can journey to the majestic holy city of Jerusalem, the opulent imperial district of Constantinople and the colourful mercantile district of Dyers. Fans of the franchise can also revisit favourite Italian Renaissance maps from Assassin’s Creed® Brotherhood specifically requested by Assassin’s Creed players to be included in the pack. To start, players will explore the historic city of Firenze (Florence), then travel to the mountains of San Donato and visit night time Siena with its carnival lights, talented performers and deadly hiding spots.

In Assassin’s Creed Revelations, master assassin Ezio Auditore walks in the footsteps of his legendary mentor, Altair, on a journey of discovery and revelation. It is a perilous path – one that will take Ezio to Constantinople, the heart of the Ottoman Empire, where a growing army of Templars threatens to destabilise the region.

In addition to Ezio’s award-winning story, the acclaimed online multiplayer experience returns, refined and expanded, with more modes, more maps and more characters that allow players to test their assassin skills against others from around the world. The latest chapter in the Assassin’s Creed saga also includes revolutionary gameplay, allowing players to manipulate the construct of Desmond’s memories and the Animus, to decipher the mysteries of his past and gain insight into the future.