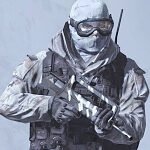 Activision and developer Infinity Ward are grooming Modern Warfare 2 to be the biggest first-person shooter release in years, but recently leaked footage suggests that the FPS market isn’t all they’re gunning for; Modern Warfare 2 looks like it might feature a third-person view mode. The extremely low-quality video above was streamed from a French gamer who somehow got ahold of the PlayStation 3 version of the game well ahead of its November launch date. If this footage turns out to be legit, then you can expect to see a behind-the-back camera option in at least one of Modern Warfare 2’s modes. [joystiq]Â
We’re not sure what to make of this video – if it’s a hoax, it’s a very elaborate one. No word from Activision yet, so I guess only time will tell if this video is the real deal or not.

Update: Just remembered this post from Robert Bowling (@fourzerotwo) yesterday: Just an FYI, if you’re wanting a spoiler free and pure Modern Warfare 2 experience, now would be a good time for a media blackout. We’re going to take that as a semi-confirmation that it’s true.