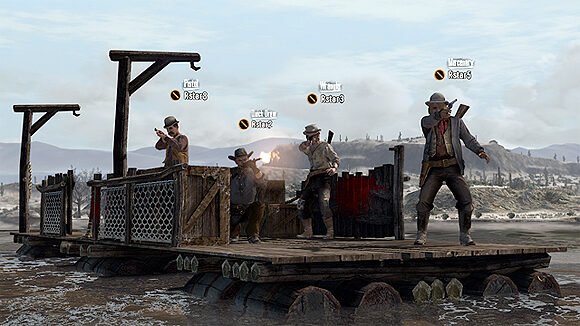 In addition to the deep single player campaign and robust online multiplayer components of Red Dead Redemption, we are also very happy to finally reveal the game’s co-op mode, which will be released FREE in June simultaneously for both consoles via Xbox LIVE and PlayStation Network, respectively.

The Outlaws to the End Co-Op Mission Pack will feature six all-new cooperative multiplayer missions to play with 2-4 players. This will be a completely free download that we will have ready for you to download and play at some time in June.

These six explosive and epic missions will play out across the game world, including:

Walton’s Gang have taken control of a mining camp rich with gold. Fight through the camp and load your mine cart with as much gold as you can carry and get out as fast as you can – Walton’s boys have rigged the place to blow!

Ride a raft down river, taking out rebel encampments along the way until you reach the rebel stronghold of Nosalida and a final epic battle for the town’s massive weapons caches. Watch out for Gatling gun-equipped enemy rafts.

The Mexican Army has the town of Tesoro Azul under siege. Storm the gates under heavy cannon, Gatling gun and sniper fire to destroy the Mexican artillery placements.

Plus three more missions to be revealed in detail soon.