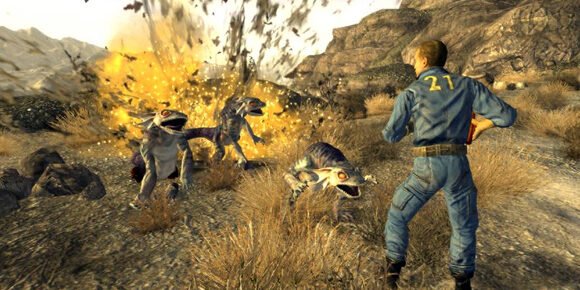 What better place to survive the apocalypse than a city that’s been so close to nuclear tests that they became tourist attractions in the 1950s? Everyone must be immune to radiation at this point, right? (I’m not a scientist). Well, Fallout: New Vegas takes place 3 years after Fallout 3, but thousands of miles away in (surprise!) the area around Las Vegas, Nevada. Fans of Fallout 1 & 2 will be pleased to see many, many references to the earlier titles in familiar enemies (geckos and nightkin), hardcode mode, and the return of the New California Republic.

I’ve been told the map is comparative in size to that of Fallout 3 and it contains many real life landmarks as well. Our demo started in Goodsprings, a small town not far from Vegas, and meandered through Primm, Black Mountain, and the Helios 1 Power Plant. The rollercoaster that unexpectedly rises out of the flat desert surrounding Primm is something I was very much hoping to see and I’m delighted that it is faithfully included. There’s also a dinosaur you can climb into, similar to the ones in Cabazon, CA (or Pee Wee’s Big Adventure) and all the signature aspects of the California/Nevada desert. The desert could easily be a boring place, but not in Fallout.

No doubt expecting that most of the audience for Fallout: New Vegas is already a Fallout 3 devotee, the customization process that kicks off the game has been streamlined immensely. You’ll be able to change your appearance, assign your SPECIAL (Strength, Perception, Endurance, Charisma, Intelligence, Agility, and Luck) points, adjust your skills, and slap on a Pip Boy 3000 in just a few minutes. Rather than having been born in a vault, you’ve been shot in the head on a courier mission and taken to the town to receive medical care.

Once you’re out in the world and taking missions, you’ll build relationships (for better or worse) with the towns and their allegiances to major factions in the area: the bureaucratic California New Republic, The Brotherhood of Steel, and Caesar’s Legions. Towns that favor or fear a certain group may react to you in various ways, helping you out of kindness or, perhaps, fear. You’ll also be tasked with figuring out who tried to whack you at the beginning of the game.

Since New Vegas is running on the same engine as Fallout 3, don’t expect massive graphical or technical changes to the game. It looks like Fallout 3 and plays like Fallout 3 with little exception. However, the benefit of not having to build or revamp a game engine certainly lends more time to developing story and playing with the existing game mechanics.

Some of the most noticeable changes are the additions of the companion wheel, a variation on speech checks, VATS for melee weapons, and weapon modification. The pop-up companion wheel affects your interaction with any NPCs that might join your party. It allows you to give simple directions and share equipment or health far easier. My hope is that I can use this to prevent my new friends, none of whom will be a super mutant named Fawkes, from stealing all of my precious XP. You know what you did, Fawkes.

We only saw the dialogue checks several times during the demo, but it appears that in certain situations, barter (and possibly other passive skills) can be used in a similar capacity to speech and you can rely on the skill you have higher points in when another doesn’t cut it. Interestingly, the game will also show how many points you have in a specific skill area versus what you need to pass the check in the dialogue tree. Seems like it will make the game less punishing for those who don’t pump points into their speech skill (fools!).

The other exciting change involves killing things! Though using melee weapons in VATS is nothing new, this time around you can target specific body parts, which may finally provide a reason to use the ninja perk. There’s also the ability to mod weapons. That can mean adding mags, damage, scopes (and most standard upgrades you can imagine) to your arsenal. All modified weapons will change in appearance to reflect the upgrade as well. Now where can I find a silencer for this Fat Man?

Perhaps the most interesting choice that players will face is whether or not to play the game in Hardcode mode (aka “Fallout for PC gamers”). In Hardcore, you need to eat, drink water, sleep and otherwise maintain your character as you would yourself. Stimpacks recover health over time but don’t fix broken bones and perhaps the scariest notion of all is that ammo carries weight. Frankly, I think I could handle everything but that!

Of course, in a game called Fallout: New Vegas, you’d expect to see the iconic Vegas strip. Our demo didn’t make it that far, but hinted at the strip being a far different environment than the surrounding wastelands and also difficult to gain access into. Given Las Vegas’ real-life reputation, I cannot wait to see its representation in the game. – g4tv